Justin Jackson scored a career-high 23 points and fifth-seeded Kentucky cruised to an 86-52 victory over No. 12 seed North Florida in the first round of the NCAA tournament on Thursday night. The Wildcats… 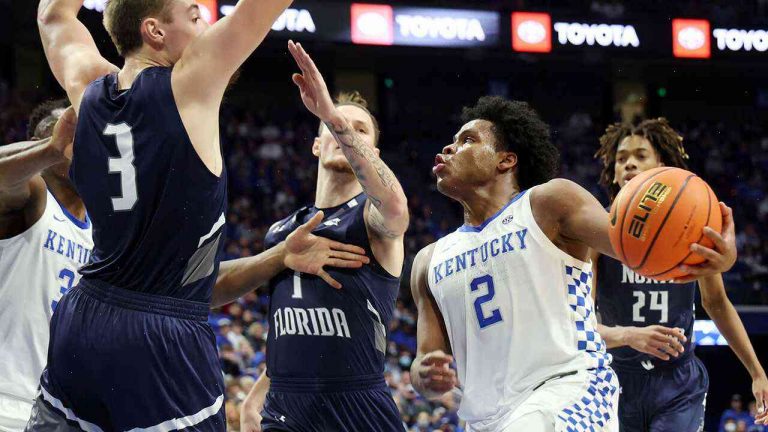 Justin Jackson scored a career-high 23 points and fifth-seeded Kentucky cruised to an 86-52 victory over No. 12 seed North Florida in the first round of the NCAA tournament on Thursday night.

The Wildcats scored 19 straight points to break open the game midway through the first half as coach John Calipari continued to field questions about Kentucky’s young roster’s inability to close out games at the end.

Calipari, who is trying to build a team capable of a deep run in the tournament, acknowledged he’s frustrated by their past two losses. His younger players didn’t help Thursday night.

Their demonstrative celebrations drew whistles from officials in the backcourt, and after Jackson hit his eighth 3-pointer to put Kentucky up 37-9 just over halfway through the half, North Florida coach Matthew Driscoll and the Lumberjacks’ faithful gave both teams a standing ovation.

Offensively, the Wildcats played big when needed as well. They had 60 rebounds to the Lumberjacks’ 35 and 23 assists to North Florida’s 12. Both teams shot better than 52 percent.

While Kentucky certainly was putting on a show, the game got chippy. Two play-by-play commentators had to be separated by a linesman after appearing to argue a call. There was also a lengthy stand-off during a break when both benches rushed onto the court to talk some more. There were a few other skirmishes throughout the game as well.

Frankly, nothing was spectacular for Kentucky.

“I mean they were the better team,” said Driscoll, who is in his second season as head coach. “They were obviously the more physical, more capable basketball team. It didn’t look like they’re young. They made plays.”

It was the Wildcats’ seventh straight win and set up a second-round matchup with No. 4 seed West Virginia.

7 tech gadgets that changed our lives in 2018