—Click here for full box score The Iowa State Cyclones needed someone to be the catalyst for a big game and it was Jarrod Uthoff. The senior forward scored 19 points, grabbed eight rebounds… 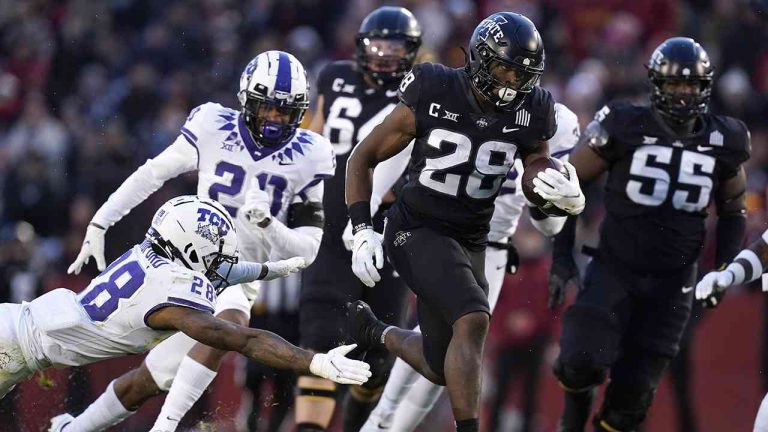 The Iowa State Cyclones needed someone to be the catalyst for a big game and it was Jarrod Uthoff.

The senior forward scored 19 points, grabbed eight rebounds and blocked six shots to spark Iowa State to a 48-14 victory over TCU on Friday night in the round of 64 of the NCAA Tournament.

Georges Niang added 17 points and eight rebounds for the Cyclones (26-8), who hit an NCAA Tournament-record 71 percent of their field goals and hit 14 3-pointers as a team.

Uthoff was the key player for Iowa State, which never trailed in the second half. The 6-foot-10 forward, who committed to TCU when he was 17, was locked in throughout the game. He scored 12 points on 6-of-7 shooting in the first half and had six rebounds at halftime.

Niang and Uthoff combined to make 14 of Iowa State’s 16 shots after halftime.

“He brought some really good energy and also was making some shots early on for us,” Iowa State coach Steve Prohm said. “I think his presence just got us going more than anything.”

TCU settled for contested jumpers throughout the game and missed all five of its 3-point attempts in the first half.

“Every player, for me, I like them to play around the rim,” Prohm said of Purdue transfer Pratt, who had 19 points and five rebounds. “He’s had a good year as a player.”

At times, the Cyclones could do little to defend Pratt, who scored on two layups in the game’s first seven minutes.

TCU struggled offensively for most of the third quarter.

The Horned Frogs shot 2-of-10 from the field in the period and had as many turnovers (three) as they had made field goals. Conversely, Iowa State kept throwing up shots from all over the court and made 11 of 18 field goals in the quarter.

“I think our team needed to step up,” Niang said. “Our team obviously missed Christian (Webb), and everybody stepped up, got the ball in the right spots, and made shots. We didn’t force anything, we just had some open looks, some wide open looks and I think we took advantage of them.”

INSIDE ON THE OTHER SIDE

Iowa State and TCU combined to make one free throw.

Freshman Donovan Jackson grabbed an offensive rebound on TCU’s final possession of the game and fired a perfect pass to Pratt, who caught the ball in stride and went up for a reverse layup.

Jackson grabbed the offensive rebound on the inbounds play and tried to pass it down low, but Iowa State’s Steven Pledger closed quickly and blocked it from behind.

“Just long arms, to be honest,” Prohm said of Pledger’s block. “Great kid. A really good defender, he’s one of those kids that can get you in the air quickly. Just a heck of a job.”

Iowa State will face No. 1 seed Villanova on Saturday in the round of 32 in Omaha, Nebraska.

“They’ve got a lot of depth, especially in the frontcourt, so we need to get into our offense, in finding who we need to find for and find other guys,” Niang said. “We’re not used to him (Dalton Pratt) playing that many minutes for them but we’re going to have to figure out ways to get him the ball, and that’s just going to take all of our attention. Not just his. The whole team.”