Tournament organisers at Erin Hills said the event will go ahead as planned on Thursday despite the venue’s full retractable roof having been unable to close even when full during the US Open. On… 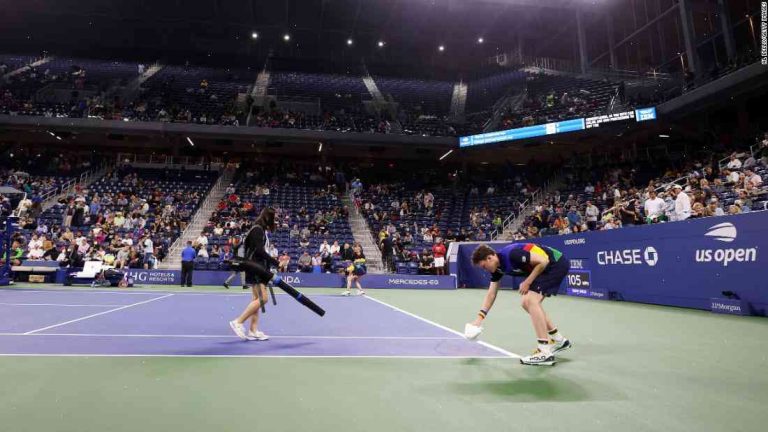 Tournament organisers at Erin Hills said the event will go ahead as planned on Thursday despite the venue’s full retractable roof having been unable to close even when full during the US Open.

On a wet and windy day, only nine of the 14 matches were completed on time as play was suspended twice on the third day. With rain forecast overnight, further rain likely to add to the already waterlogged course on Thursday, organisers told players it would be safe to start in the morning but downpours later in the afternoon meant the weather caused major problems even for matches that had begun.

Play was suspended for around an hour and 20 minutes twice – once in the afternoon session, first at 7.28pm BST when the 11.24pm leaders were due to play and then an hour later with conditions worsening, long before Rory McIlroy began his fifth and last round.

Patrick Reed, the Masters champion, became the first to complete his match when he won against Padraig Harrington. But the tournament was called off just after 8pm.

Waterlogged conditions also led to delays on the first and 13th days of the event as last month’s championship at Erin Hills was the first to play as part of the new system that allows a roof to be installed at the last minute as conditions deteriorate. The bleachers will remain under roof, with spectators working with the members and organizers to distribute food and drinks.

The USGA executive director, Mike Davis, suggested the delay of play is not a major concern.

“It’s a good learning experience for everybody to have two days of wet conditions with no real downpour,” he said. “That’s good practice. There’s nothing we’re going to learn on this weekend that we’re not going to be able to learn at St Andrews. We’re going to learn the same things.”