Lewis Hamilton achieved his seventh Formula One world championship on Sunday with a dominant win at the Indian Grand Prix, extending his lead in the standings to 82 points with seven races remaining. The… 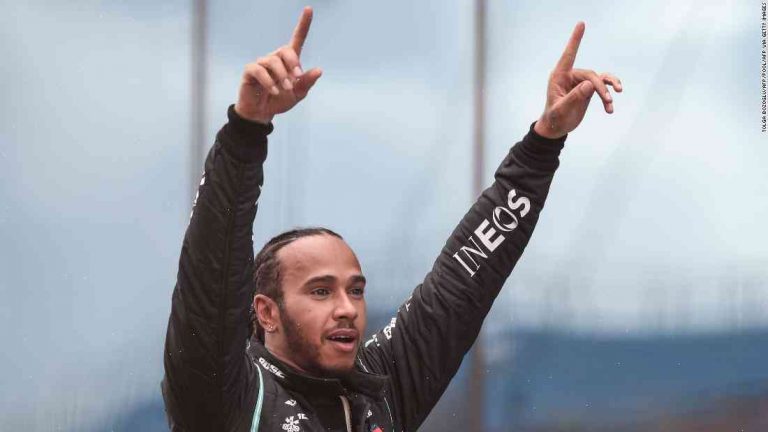 Lewis Hamilton achieved his seventh Formula One world championship on Sunday with a dominant win at the Indian Grand Prix, extending his lead in the standings to 82 points with seven races remaining.

The English world champion’s win, when he led all the way from pole position to flag, leaves him tied with the legendary German Michael Schumacher with seven world titles.

Despite Sunday’s win, Hamilton might not have been able to retain his title this year had Sebastian Vettel not been disqualified for exceeding engine limits at the previous race in Japan.

If Hamilton had continued in the same vein as in Asia he would have clinched the title already. Vettel retired on lap 33 of the 71-lap race.

With Vettel disqualified, the 44-year-old Italian great Fernando Alonso took his only points so far in Formula One as he drove out from the middle of the pack for the second straight race. The two-time champion is Ferrari’s non-scoring driver this season after an accident at Azerbaijan’s inaugural race in June.

It came only seven days after his family ordered him to cut back on his partying habits after Hamilton crashed into a fire hydrant following a night out partying in London on Nov. 7.

On Sunday, the defending champion stepped out from his McLaren after he took pole position and set a blistering pace out front, less than a second behind Red Bull’s Daniel Ricciardo.

But as he sped through the first part of the race, all Hamilton could do was sit on the back of a lapped Ferrari and watch Vettel and Alonso sprint past him from the safety zone on the mid-race restarts.

By the end of lap 23, Vettel was 18 seconds ahead, and almost double Hamilton’s pace in Sunday’s race, while Alonso had followed the pre-race plan to conserve his resources and he was almost a minute behind his teammate in 21st place.

US Open 2017: Serena and Venus Williams out of their matches at Flushing Meadows

I want to raise money for Fears. Fears is a very worthy cause.