Protesters pushed through security barriers and set fire to an Australian-owned chocolate factory in Solomon Islands’ Chinatown, sparking a grisly set of discoveries in the business district. According to the Associated Press, police believe… 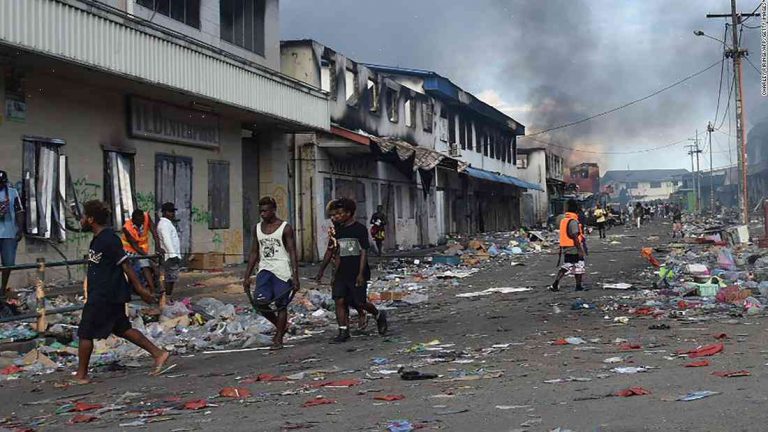 Protesters pushed through security barriers and set fire to an Australian-owned chocolate factory in Solomon Islands’ Chinatown, sparking a grisly set of discoveries in the business district.

According to the Associated Press, police believe three unidentified bodies were also found Monday in a burned-out car near the upscale Bay Hotel. It is believed that one or more protesters set the car on fire to cover up the murder of a community leader. The police are continuing to investigate the murders.

The shootings left the owner of the Bay Hotel, Andrew Locke, in critical condition. Locke was initially hospitalized last week after being kicked and beaten while he was trying to stop protesters in his hotel from damaging the property. Police have identified three suspects in the attacks.

The violence continued through Sunday night, with protesters targeting a Christian radio station and a market building, injuring seven officers.

The assault against Locke occurred amid days of outrage over media coverage of anti-government protests in downtown Honiara. Videos of police forcibly removing protesters from the office of the prime minister and of a storming of the police headquarters have been posted online, causing a large outcry.

On Sunday, assailants attacked Locke and two other people at the Beachcomber Hotel in Honiara, killing Locke, Ian Jackson, 39, and Charles Renen in a hail of bullets.

Locke is the owner of the Bay Hotel, which used to be an eatery before he purchased it in 2009.

Locke was born in the Solomon Islands, where he went to school and lives with his wife and two children.

The violence is part of a run of unrest in Honiara that began last week with protests over a court decision to dismiss a prominent commercial leader who had defied a protest injunction.